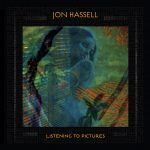 I remember my first acquaintance with Jon Hassell‘s music very well. It was back in 1980, and I checked out Fourth World Vol. 1 – Possible Musics following the Brian Eno link (obviously). I was not yet familiar with his earlier work Earthquake Island and Vernal Equinox. I remember I was totally confused, listening in that small record shop. I could not understand this music at all! It seemed to come from another world, one I could not even begin to imagine. I did not buy the album.. it was way off.. too weird for me at that moment.
But upon going home, the strangeness music kept haunting me. What was it, this strange atmosphere, the whispering trumpet sound that resemble an elephant that caught a cold, the otherworldly rhythms?
Before I reached home I turned around and headed back to the shop. I decided that any music that could surprise me this way deserved to be bought.
I remember peddling my bike even harder because I was afraid that someone else would buy that single copy available.
Jon Hassell‘s music never left me since. And never disappointed me either (although naturally I prefer some of his projects more than others).

A part of this somewhat disorienting surprise came back to me again when listening to Pentimento, Vol. One. Not as strong as with this first encounter, of course: 38 years later I am quite familiar with his music. But still: Jon Hassell is not a man to simply repeat himself.

Pentimento is a noun meaning “Reappearance in a painting of ealier images, forms, or strokes that have been changed and used as elements in a final composition”.
This suggests that parts and fragments of earlier work are re-used, de-constructed and re-arranged in new compositions. And of course there are many recognisable elements from Hassell‘s earlier work – the way he controls his insrument, the ‘spliced’ electronic layers it is embedded in – and yet Pentimento also feels like a new direction.
At first listen I found the overall atmosphere on this album more ‘nervous’ than I expected. I probably expected the lush and reassuring ambience of the Fourth World releases, and his previous (2009) album Last Night The Moon Came Dropping Its Clothes In The Street – but Pentimento is more in the vein of City: Works of Fiction (1990) or the Bluescreen projects.
This took me some time to adjust to, but -as often- persistance proves to be rewarding.

This nervous tension in the music, alternated by moments of profound peacefulness, probably reflects Hassell‘s theory about ‘The north and south of you’:
“A mind formatted by language and located in the head compared with the area of wildness and sensuality below the waist where dance and music and procreation reigns.”

Another way to enjoy these sounds is by what he calls “Vertical listening”, an exercise in ‘mindful listening’:
“Most of the world is listening to music in terms of forward flow – based on where the music is “going” and “what comes NEXT. ” But there’s another angle: Vertical listening is about listening to “what’s happening NOW ” – letting your inner ears scan up and down the sonic spectrum, asking what kind of “shapes” you’re seeing, then noticing how that picture morphs as the music moves through time.”

There is no way you can overestimate the work of this now 81 years old living legend, a man who studied under Karl-Heinz Stockhausen, played on the orginal recording of Terry Riley’s In C, worked with La Monte Young in his Theatre of Eternal Music, and studied singing with Pandit Pran Nath. And this, of course is only the foundation of his work, defining a personal genre that has inspired many artists.

And there’s more good news: Listening To Pictures (Pentimento, Vol. One) is the first release on Hassell‘s own brandnew Ndeya label, which promises to release new and unreleased music as well as archival releases.

As a somewhat related sidenote:
If, like me, you’re a devoted follower of Jon Hassell‘s work and contributions, I suggest you track down this album by Michael Fahres called ‘The Tubes‘ – an album that may be one of Hassell’s most obscure collaboration projects. The environmental recordings of the ‘breathing rocks’ on El Hiero, combined with Hassell’s trumpet and Mark Atkins’ didgeridoo, is an ode to the breath of life itself – ánd a perfect exercise in ‘vertical listening’. I don’t know if this is still available from Cold Blue Music but – given its relative obscurity – it probably is. If not, it’s definitely worth tracking down on Discogs or similar. 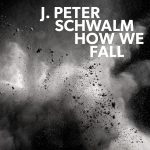 J. PETER SCHWALM – HOW WE FALL

Of all the artists that came into view via a Brian Eno connection, J. Peter Schwalm is probably one that remained unknown to the larger public. Unfairly, because his music is most interesting and multidimensional. The two worked together on Music for On Myo Ji (2000), the soundtrack of Nicolas Winding Refn’s Fear X and even more intense on Drawn From Life (2001).
Since then, Schwalm released two solo albums (Musikain and The Beauty of Disaster), and an album with transformations of the music of Wagner.

How We Fall is his second release on the Italian Rarenoise label. Apart from additional guitars by Eivind Aarset and bass by Tim Harries, Schwalm performs all instruments himself, avoiding ‘popular or widespread plug-ins, instead using analog an digital outboard effects to achieve his characteristic sounds’ and the ‘multitrack composing’ technique he developed when performing at the Punkt Festival.
The result is a complex but highly detailed, ‘widescreen’ sound that perfectly matches his compositions.

Most of How We Fall has a deep sense of urgency, unrest, of hidden ‘angst’. This has everything to do with Schwalm‘s personal situation: in 2016 he was diagnosed with a brain tumour, which proved impossible to remove during the operation. Definitely one of the most threatening personal verdicts one can imagine.
In the following year Schwalm “set to work under this impression, partly weakened by the inevitably following chemotherapy. Over the course of the year, pieces were created that reflect feelings such as restlessness, fear, despair and anger, but artistically process these emotions into abstract sounds.”
“During the process I realized that there are parallels between my personal experiences and emotions and the current social and political situation in the world,” Schwalm recalls. “The music represents a closed universe that reflects the moment and the circumstances in which it was created.”

Knowing about this background gives How We Fall an extra dimension, and forces respect for the way J. Peter Schwalm faces his deepest fears and still manages to let the rays of hope shine through. It deepens the appreciation of this album. But, as with all good music, it is not really necessary to know about this to receive the message of this music.