A few days ago, Wouter van Veldhoven mentioned his praise for Soccer Committee‘s album sC (2007).
‘It’s almost ten years old now’, he wrote, ‘It is also probably the best minimal album ever made, regardless of subgenre. The album would likely be labeled minimal folk/songwritery music, but please give it a good listen, because this is way way more than just songs.’

I remember seeing (and hearing) Mariska Baars (Soccer Committee) for the very first time when she played support for a Stars of the Lid show in Utrecht in 2007, and I remember feeling the same way: these are not ‘just songs’ – there’s something more to them, something that is hard to grasp and explain.

Around that time (december 2007), I made a mix from Soccer Committee‘s music paired to that of Machinefabriek. This mix was never published here before, because it was made for the NPS-Folio radio show broadcast.
The Folio shows are archived in this Mixcloud profile, but I don’t usually mention them here. Time to make an exception to that rule: Wouter van Veldhoven’s post made me decide it was time to dust off the 2007 mix and publish it again. Because it’s still as powerful now as it was back then, almost 10 years ago.

Connecting Soccer Committee‘s acoustic, minimalist and pure songs to Machinefabriek‘s experimental electronics may seem like a strange conjunction of opposites, but it works very well (at least, for me it does): it seems to bring out a somewhat hidden, ‘peaceful and true’ emotional layer to their music.
And it’s not such a strange combination as it seems to be: Mariska and Rutger have been working and performing together for many years in projects like Piiptsjilling and various other combinations.

A lot has happened since 2007. Machinefabriek‘s musical career (and his discography) has exploded to worldwide acclaim, and while Mariska Baars is still incidentally performing music in various projects, Soccer Committee is not active anymore: she now expresses herself through her paintings mainly. 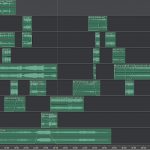 …interspersed with (fragments of) tracks by Machinefabriek:

Or stream it on Mixcloud: